History lecturer Dr Ben Maloney is sitting in his office when the phone rings. A call from his cousin is rarely anything out of the ordinary, but today what he has to say is anything but normal. Their great-great-grandfather’s body has been discovered in a boat near a deserted island in the Isles of Scilly. With a bullet through his skull!

Dropping everything, the cousins’ decision to visit the site of their ancestor’s demise soon proves to be one that will change their lives forever. With nothing but a hundred-year-old diary and legends from the past to guide them, Ben soon realises their quest to solve the riddle of their ancestor’s death will require them to take on an altogether greater mystery that will lead them not only halfway across the world delving deep into humanity’s bloodiest past but potentially to their own deaths. An unimaginable treasure remains undiscovered – one with the ability to change the world for better or worse. And some will stop at nothing to find it . . . 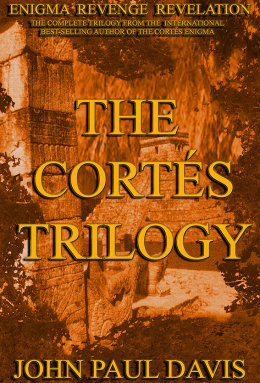 Mexico 1520: As the Aztec Empire burns to ash at Hernán Cortés’s feet, in another part of the country a great treasure lies hidden in a sacred place watched over by its keepers. Throughout the land, a strange legend has long told of an ancient people dwelling deep within the jungle whose possessions include a precious set of stones with the potential to bring unlimited power to its owner. As well as wealth beyond their wildest dreams . . . ...more
Next
Previous