The legend of Robin Hood is one of an iconic symbol rather than the story of a man. It began at a time when the people of England were deprived of many basic rights. A time when the feudal system was at its height. For the inhabitants of England at the time, the social conditions would have been notoriously hard. At no time were they allowed to chose a varied way of life, nor were they free to work when and for whom they chose. It is strange in many ways that such a way of life inspired many writers in the 19th century to glorify the time. To them, it was an age of prosperity: a time when the people of England farmed the land, enjoying success and clean living, plentiful food and an idyllic backdrop of rolling countryside.

The time of the Robin Hood legend was a time when hunger and deprivation stalked the land. The crimes and failings of the feudal system were long and aggravating. Should one attempt to remove themselves from a life of toil and suffering, the promise of extended hardship was the only reality – in many cases, time in the stocks and even death. 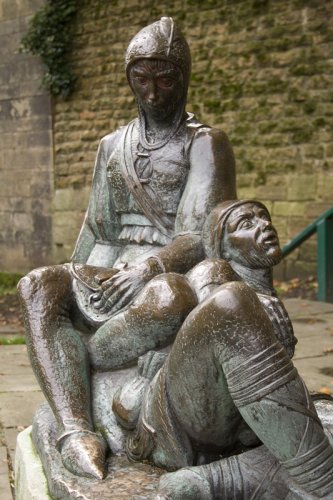 Little John and Much the Miller's Son, Nottingham
While it is probably true that those who lived at the time of the legend longed for freedom, precisely what their concept of liberty was cannot be answered by a freeman enjoying the privileges of the 21st century. Outside the towns and villages, the country was covered in forest spanning into the hundreds of thousands of acres. While the silence and lush greenery of the forests has come to represent an idyllic symbol, for those of the lower class, the woods held great mystery. Stories abounded that evil spirits, survived from an ancient time, inhabited the forests plaguing on travellers with magic. But it was not just spirits who inhabited the greenery. Within the dense thickets and glades, thieves and murderers preyed on passersby, seeking out ill-gotten gains, surviving on deer, wild boar and rich venison, creatures whose killing was strictly illegal to all but a select few. Traditionally, it was due to a hatred of the feudal system and a necessity to poach deer that the tales of the noble outlaw originated: never was Robin Hood an outlawed nobleman, or a disinherited Saxon as depicted throughout the last century, but simply: an outlaw.

For those who escaped the feudal system, or those outlawed for fleeing trial, the forest was their refuge. But if it was a refuge, it was a refuge of last resort. The iconic representation of the legend encapsulating the idyllic setting of Middle Ages England is powerful, but its message is probably more potent than it is accurate. In reality, the romanticism of the outlaw owes a lot to the later writers, and incorporates more about the age in which it was told than the age he lived. As the centuries have passed such romanticised impressions of Middle England has become inseparable from the legend, forever entrenching its image on the English national identity.

While it is true that the forest and the outlaw encompasses much of the Robin Hood legend, in truth, the legend of Robin Hood includes many things. In the early days he was a good fellow of the oppressed, a leader of integrity, an excellent archer and a man of sincere, and often extreme, piety. Though the legend has evolved, the symbolism of the honourably outlaw has adapted with it. In such ways, Robin has grown to mean more than the identity of the man. No longer are they historical stories of a man and his loyal supporters. Instead, they are tales of morality, focusing on our desire for a time when the corrupt and the disgraced are replaced by the noble and the good, setting up an age of prosperity where the idyllic forest takes on a form of genuine utopia.

But if indeed there was such a man, his existence was one of suffering. The ballad, A Geste of Robyn Hode, refers to the conditions being more arduous than any hermitage. But in operating in such a way, and living at such a time, the legend of the man brought with it other positives. For the audiences of the early tales, the antics of the man were not only those of hope, but they gained in Robin the image of a powerful ally.

The legend has continued to adapt and endure, but in doing so, the identity of the man has, at least in the mainstream, become almost irrelevant. For me, that has always been a great disappointment. While the story of Robin Hood is indeed one of symbolism, that is no reason to dismiss the importance of the historical man. The emphasis of the early legend was that Robin was an outlaw ‘who walked on ground’ and that tales of his tragedy and comedy did occur sometime before the legend became celebrated. Whether the man described in the ballads as a ‘yeoman’, a man of meagre of means, not necessarily dissimilar to the typical commoner of the English feudal system, was genuinely inseparable from the historical inspiration is a question that can never be answered. For audiences of the modern legend, the answer is more clear cut. But even the man portrayed as a Saxon freedom fighter is not completely removed from the hero of the early days. One way or another, the hero is always an outlaw, and his assistance to the oppressed is noteworthy.
Next
Previous