Henry of Winchester was born on 1 October 1207. He was the eldest son of King John of England and Queen Isabella of Angouléme. Named after his grandfather, Henry II, Henry became John’s official heir in 1209 and again in October 1216 when his father was bedridden at Newark Castle. 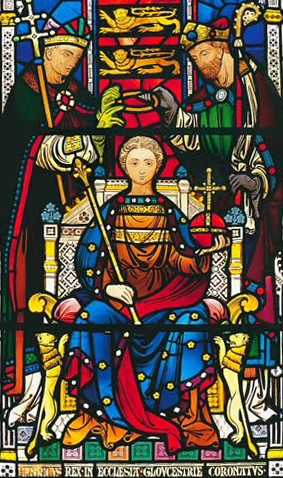 Henry being crowned in 1215, from a stained glass window in Gloucester Cathedral
Henry was just nine years of age when he ascended to the throne. At the time of John’s death, England had been plagued by civil war for over a year, following John’s decision to encourage Pope Innocent III to annul the Charter of Liberties. He was crowned at St. Peter’s Abbey, Gloucester, on 28 October 1216 in the presence of only a small section of the barons and the papal legate, Gualo. Despite his coronation, the king controlled less than half of England, the majority of which fell under the authority of the rebel barons and their new leader, Prince Louis, son of Philip II of France.

Due to his youth, Henry was incapable of ruling alone. William Marshal, the Earl of Pembroke, was appointed as regent, to act as guardian for the king, alongside the justiciar (effectively prime minster) Hubert de Burgh, and Peter des Roches, bishop of Winchester, also the king’s tutor. The new arrangement was officially announced on 11 November 1216. One of their first acts was to reissue the Charter of Liberties, this time with the more restrictive clauses omitted. Despite the implementation of the charter, war continued with Louis into 1217. In May, the royalists achieved a significant victory over Louis at Lincoln and in August Hubert de Burgh defeated Eustache the Monk off the coast of Sandwich, leading to a decline in fortunes for the French. Peace was reached in September, thus beginning Henry’s undisputed rule. In November, the Charter of Liberties was issued for a third time, along with a separate charter of the forest. Henceforth, the Charter of Liberties became known as ‘Magna Carta’.

Louis’s departure saw the beginning of a new era in England. Progress was made in restoring order, including peace with Alexander II of Scotland. Gualo left England in 1218 and was replaced by a new legate, Pandulf, the same man who had received John’s homage to Rome in May 1213. Marshal’s death in May 1219 saw the regency fall primarily to the legate, though no new regent was appointed despite the king’s young age. In 1220 he was crowned a second time, this time at Westminster Abbey, built by Edward the Confessor.

The death of Marshal left divisions among the council. Hubert de Burgh’s rise in power saw a similar decline for many of the barons, all of whom were ordered to relinquish control of royal castles in their possession, as given to them by John. Henry retook the castles of William of Aumale by force and also agreed to give his sister, Joan, in marriage to Alexander II of Scotland. After overseeing the translation of the relics of St. Thomas Becket into the new shrine at Canterbury, the king saw off a rising from Aumale in early 1221 before witnessing the marriage of his sister. Pandulf departed, leaving England without a legate, less than a year after putting down the first stone of Salisbury Cathedral, the first purpose-built gothic cathedral in England.

Trouble on the Welsh border was put down early in 1222. Following this, a rising occurred in London due to a lack of affinity with the king and discontent at the increased influence of Hubert de Burgh. Henry III held a great council in early 1223 at which he agreed further measures of compliance with the charter. In April the Pope declared that Henry, though still in minority, had the right to rule of his own accord. Problems with Wales heightened during 1223, forcing the king to encounter Llewellyn ap Iorwerth head-on though with limited success. At around that time, word reached Henry of a plot against the justiciar, which was put down in January 1224.

Philip II’s death in 1223 saw renewed conflict with Louis, now King of France. Pope Honorius III’s decision to encourage further crusade in the East, rather than continue the Albigensian battle against the Cathars in the south of France, saw Louis invade Henry III’s land in Poitou. As Henry prepared for war, John’s loyal baron, Falkes de Breauté, rebelled against Henry and set up his base at Bedford Castle, forcing Henry to abandon Poitou. The siege of Bedford took place from 20 July to 14 August, following which Breauté was banished. War with Louis was again mooted at the end of 1224. Following this, Hubert de Burgh requested an aid of 1/15th on all moveables to fund the expedition. In return for the magnates’ approval, Henry agreed to a fourth issue of the great charter, confirming its position in English law. In March he sent his brother, the recently knighted Earl of Cornwall, to Gascony. His successful campaign achieved the return of Gascony to Henry’s sovereignty.

A papal envoy arrived in England in 1225, apparently seeking a pardon for Breauté as well as to collect money for the papacy. In 1226 Henry was once again planning for war with France. However, this was delayed at the request of the Pope. Louis died in November 1226 and was replaced by his young son, Louis IX. Henry sought to capitalize on the event by seeking assurances from the French territories of their support for an invasion. Henry held a conference in Oxford in January 1227 following which he sacked des Roches and declared himself fully of age. With this, began the personal rule of Henry III of England.
Next
Previous